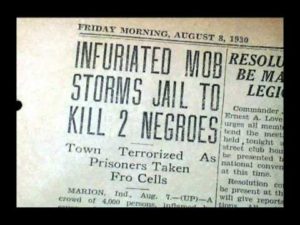 A national nonprofit organization says at least 18 lynchings took place in Indiana between 1880 and 1940, as part of more than 300 lynchings in eight states outside the deep south during that time.

The Equal Justice Initiative released a new report Tuesday outlining the history of racial terror lynchings in the United States.

“Racial terror lynchings were horrific acts of targeted violence against African Americans…by white mobs who murdered black people with no risk of accountability or punishment,” the report says.